In 2005, I was embedded as an independent journalist with a platoon of Marines with an attachment of Afghan security forces in the Hindu Kush, just a few miles from the Pakistani border. I was about to step into a possible death trap, and I’d never felt more scared in my life. “There are 50 Taliban massed behind that ridge,” said “Sultan,” our Afghan interpreter (his real name is being withheld for security reasons). He had picked up chatter from his hand-held radio. “They know we’re here,” he continued, “and that we have to cross that field.”

“Time to get moving,” a nearby Marine said.

We began to move, navigating the terraces on the outskirts of a small village. An hour later, we regrouped by a mosque. No attack came; we later learned that the “chatter” was one person transmitting fake orders to fake fighters—a common ploy to confuse U.S. and coalition troops. Back at the Marines’ base, I asked about UAVs (unmanned aerial vehicles) the Marines could have used for reconnaissance in that situation to confirm the warning, had fighters actually been gathering to attack.

“Yes, we have them,” said First Lieutenant Patrick Kinser, the platoon commander. “Never use them, though. They often end up being recovery operations—sometimes dangerous recovery ops.” Kinser was talking about the two Dragon Eye UAVs that his platoon had been given—and had to chase down a number of times in the steep mountains around the base, after they crashed. “And the image quality is terrible.” Kinser said that even the slightest mountain winds made the UAVs’ video feed too jerky to identify much of anything on the ground. “Can’t make out anything of use, really,” he continued. “I once joked we should just fly them both into a tree, so we’d never again have to chase them down.”

The Dragon Eye, while slightly larger than a truly “backpackable” UAV, was also cumbersome to launch: Either it required a bungee cord, or one of the grunts had to throw it hard while running, exposing himself to potential enemy fire.

Five years after my experience in Afghanistan, I visited the Marine Corps Mountain Warfare Training Center in California’s Sierra Nevada mountains. I wanted to know if the instructors had any experience with a small UAV that was capable of enduring mountain and desert flight. They had not, although they mentioned the Dragon Eye, and the related RQ-11 Raven, but noted that neither was compact enough to be backpackable. They had hopes for micro air vehicles that they’d read about, but most were fixed-wing.

“Think of urban fighting,” said Sergeant Tony Powers, one of the instructors and a Marine scout sniper. “That’s when a squad could really use a micro UAV to get eyes on an enemy position. But a fixed-wing platform flies too fast, and isn’t maneuverable in those tight confines.” According to Powers, the most useful platform for such situations is one that can move in any direction, quickly or slowly, then go into a hover and pass video feed back to the user—perhaps a micro-helicopter UAV.

So began my UAV project. Like aircraft homebuilders whose requirements couldn’t quite be met by the kits or plans on the market, I wanted to construct a UAV optimized for a set of tasks that my experience with the Marines suggested. Here are the steps I took to create the Kestrel-6, named after the bird of prey, known for its hovering ability. (The “6” came from the atomic number of carbon and the number of motors used on the craft.) The entire project cost roughly $3,500.

I chose a multi-rotor aircraft over a fixed-wing or helicopter because I wanted to be able to get a static view. Multi-rotor aircraft are also fast, very stable, and able to launch vertically in the tightest of confines—even inside a room and out a window.

Multi-rotors typically use anything from three motor-propeller assemblies to eight, mounted at the end of arms that are centrally interconnected. I chose the “Y6” configuration, composed of three motor-mount arms with two co-axially mounted motor-propeller assemblies at the end of each arm. With two motors per thrust point (one facing up as a “tractor,” and one down as a “pusher”), the Y6 has redundancy. Because it has only three arms, it gives a mounted camera a wide field of view. I needed the UAV to be as small and stable as possible. Smaller fixed-wing UAVs often fly “squirrelly,” but that’s not true of a well-designed Y6, with its multiple points of thrust stabilized by a high-performance flight control computer.

Multi-rotors fly with remarkable speed and stability because they have a number of points of thrust, not just one. Each works against and with other thrust points—and with and against gravity—to move the craft along three axes, and, if needed, hold it steady in one position.

A multi-rotor pitches, rolls, yaws, and hovers by varying the speed of its motors (each connected to a fixed-pitch propeller) individually, which varies thrust (for pitching and rolling) and torque (for yawing). This type of aircraft, however, is inherently unstable unless “balanced” by a very powerful flight control computer, one that can analyze aircraft attitude and position, then provide control inputs (as motor speed rate changes) orders of magnitude faster than a human’s ability. Think of trying to balance a baseball atop the tip of a pencil: You’re not really “balancing” it, but constantly moving the pencil under the baseball in a dance with gravity to get a few brief moments of relative stability. But most people don’t have the eye-hand coordination for such a feat. Similarly, until recently, sensors and computers simply couldn’t work fast enough to use multiple thrust points to control a small aerial vehicle.

Over the past few years, the electronics industry has made great strides in the development of micro-electromechanical systems and inertial measurement units. These include tiny, solid-state, multi-axis gyroscopes for spatial orientation and accelerometers to measure change in velocity to guide multi-rotor and other types of aircraft. Manufacturers also produce micro-electromechanical magnetometers for navigation, and pressure sensors (barometers) for altitude determination.

I settled on a company at the forefront of the technology, Hoverfly Technologies. Their HoverflyPRO control module uses 16 parallel processors in its flight control computer to analyze thousands of inputs per second from the onboard three-axis gyroscope, three-axis accelerometer, and digital pressure sensor.

The controller, a printed circuit board that measures just 2.75 by 2.75 inches by 0.5 inch high, takes flight control inputs from a digital receiver (taking commands from a user-controlled transmitter on the ground) and tells the Kestrel to go, stop, and hover.

The board commands the camera to pivot up and down, and side to side, has an altitude-hold function, and overlays vital flight data on live video fed to a ground station—if a video transmission system is mounted to the craft.

I also bought the HoverflyGPS control unit, which, when mated to the PRO board, adds three-dimensional position hold, automatic return-to-home, and waypoint navigation.

Step 5: Designing, engineering, and constructing the UAV body—with a little help from friends

I could have simply mounted all of the components on a pre-built hobbyist multi-rotor body, but I wanted the final aircraft to be as light and small as possible, very strong, built specifically around my components, and have no parts such as wires or electronic speed controllers (ESCs) dangling in the open.

With the dimensions of all of the components, I used illustration software to sketch out the smallest craft possible.

For construction material, I chose carbon fiber (which I ordered from DragonPlate, in Elbridge, New York). It’s extremely light and strong, although notoriously difficult to cut, and it’s an electrical conductor, so I could not have any exposed wires. Carbon fiber is also excellent at dampening vibrations, important for any flight controller, as vibrations can affect the performance of the accelerometer and gyroscope, not to mention the video. Then came the hard part: I had to engineer each individual piece of the UAV body, but I had no experience in engineering or computer-aided design. Most of the professional CAD programs cost thousands of dollars, far out of my price range. I bought an older version of TurboCAD I found on Amazon for less than $30.

Using exact dimensions of the HoverflyPRO controller, ESCs, motors, and so on, I engineered 29 parts in one month. 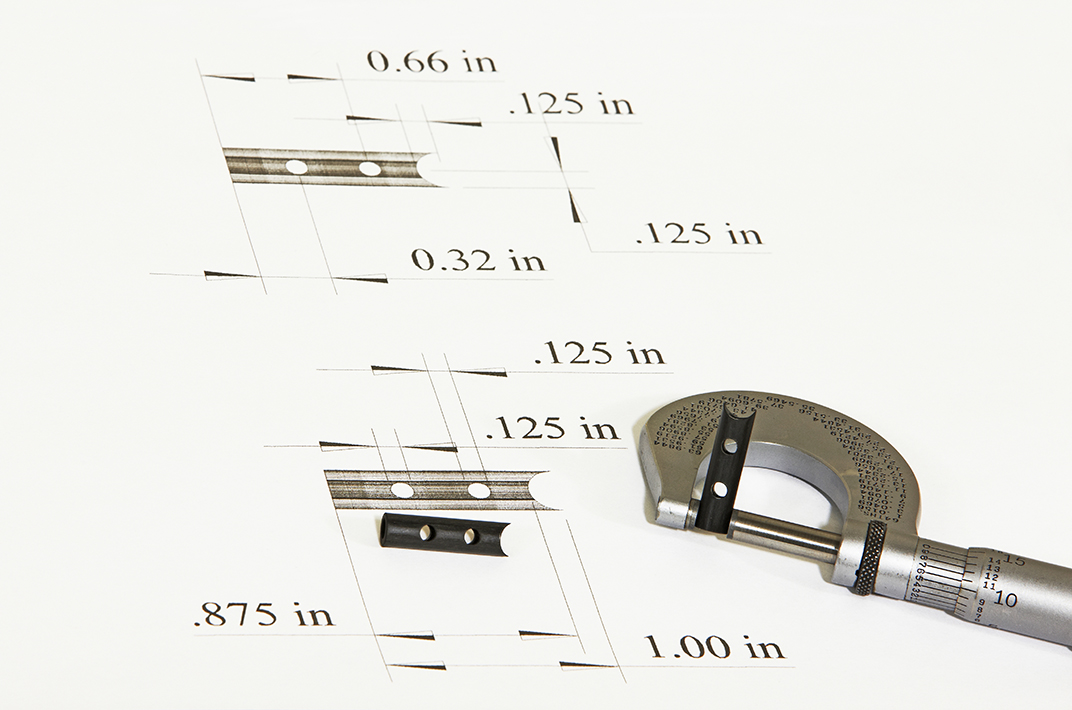 A caliper micrometer with one of the extruded carbon fiber parts. (Ed Darack)

Virtually constructing the body of the craft with TurboCAD, I was able to include folding-forward arms for ease of transport, perfectly align all holes for screws (I wanted everything to be connected mechanically, with no glued parts), and gain a sense of how it would balance with all components mounted—vital for multi-rotors.

With the parts engineered, I needed them milled from the pieces of carbon fiber stock. This turned out to be much more difficult than I imagined. Few machine shops work with carbon fiber, as it “eats” cutting bits. I finally found Jason Sauer of Pinnacle Machining in Fort Collins, Colorado, who agreed to help me.

There is no universal file format for CAD; Sauer was quickly able to redraw the TurboCAD files for the simple parts by hand, but for the more complex pieces, I had to figure out how to convert the files.

Stymied, I put an ad on Craigslist, and within 30 minutes heard from Tom Hanson, a machinist-turned-engineer who has his own firm, Hardware Collaborative. He was intrigued by my project (he often donates his time to educational engineering projects), and converted the files in minutes.

With the files completed, Sauer cut all of the parts—to a .0001-inch tolerance—on his three-axis Haas computer numerical-control milling machine.

Thanks to Sauer’s skill, the pieces of the craft fit together perfectly. Carefully cutting, soldering, and shrink-tubing (to insulate and protect the soldered wires and connectors), I finished the construction of the Kestrel-6.

Test flying the UAV was the mostfrightening part of the project. As each part was one-of-a-kind, I thought a design error or crash would kill the vehicle—and the entire project. And crash it did, but not catastrophically—just enough to break some propellers.

Then it crashed again, from about 30 feet up. Remarkably, it sustained only minor damage, thanks to the bolted carbon fiber construction and the lack of exposed components.

I was never able to determine what exactly caused the crashes, but it could have been a power brownout. The crashes actually proved to be a good thing, as they demonstrated the Kestrel-6’s resilience.

To ensure that I had the craft configured properly, I took it to Bill Clary of Got Aerial, LLC, based in the Denver, Colorado area. Clary is an aerial videographer and photographer who shoots from a variety of unmanned multi-rotors. Clary fine-tuned the Kestrel-6 and gave me some vital piloting pointers, such as always having a detailed flight plan. (The Kestrel-6 runs out of battery power in about 12 minutes.)

From that point, I was able to fly the Kestrel-6 with continuous real-time video downlink from the GoPro, which I could position wherever I needed (and use to record high-definition video footage).

Although not done in a military setting, these tests—including up-close footage of a spinning wind turbine hundreds of feet high in 20-mph wind—proved the concept: Anyone can create a small, rugged, purpose-built UAV and put it to practical use.

Thanks to the GPS, I was able to “park” the craft and hold it at a chosen altitude, and even have it fly back to its launch point, all while seeing what it was seeing, and easily positioning it for other views—everything I wish I’d had during that terrifying moment just before entering the potential kill zone in Afghanistan.

Why Personal Tech Is Depressing

9 reasons why PC gaming is a better value than consoles

WHAT IS A DRONE

Reviving Mafia Part 1: The Rebirth of a Franchise